← Getting to know you
Doctor, doctor → 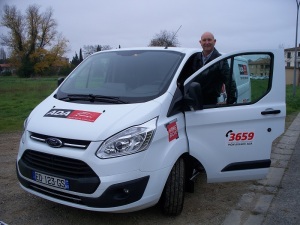 Bill and the big, little van

We’re in. There’s still a month to go on the lease of our rental house but we wanted to be into our own place to start the new year. That will give us plenty of time to thoroughly clean what we’ve called “home” for the last 11 months before we turn it back over to the landlords. It also means that if we get any last minute out-of-town guests before March 1st, they can stay there instead of stepping around unpacked boxes, over cans of plaster and paint, and through ladders leaning against the walls. Just as we did a few months ago, we rented a van, only this time instead of going to the supermarket to pick it up we literally crossed the street from there to a rental car agency.

We discovered this rental agency when we returned the first van to the supermarket. Bill looked them up online and found that for 40 euros/dollars per day we could rent the type of van we see all over town every day. These are perfect for businesses who make deliveries or carry building supplies down narrow, house-lined streets that were laid out long before anything wider or faster than a horse-drawn carriage went down them. Just like the first rental, that rate included 125 kilometers (78 miles) and basic insurance.

As we walked up to the agency for our 10 AM pickup appointment, we both immediately noticed than an employee was polishing a much larger vehicle than we had reserved. The gentleman quickly finished and then came inside to tell us that “our vehicle” was now ready to drive away. He explained that there would be no additional charge for this upgrade and assured us that if we took it on the toll road, the fare would be exactly the same as if we were driving the smaller van that we had reserved. Besides, he said with a smile, the ride would be très confortable. I was certain that it would indeed be very comfortable sitting inside considering that it was wide enough to accommodate the driver and two adult passengers across the front seat. Driving that comfortably down our old and new streets might be a different story.

Fun streets to walk but driving is a challenge

Bill is always up for a challenge, so we set off to pick up the boxes that we had packed the night before waiting to be moved over to the new house. He may be a skilled driver but it would have taken an army tank to get over/around/through the roadblocks we discovered when we got back to the rental house. The people on one end of the street were having new windows installed so even if the carpenter’s huge van had not already blocked the road, all of his equipment, tools, plus the new and old windows laying on the ground would have. Just to make sure that we didn’t even attempt to drive down our one-way road from the opposite end, a neighbor there had what appeared to be his entire winter’s worth of firewood delivered by a dump truck that, true to its name, had dumped the wood in the middle of the street.

Luckily there is a partial alleyway near the house that Bill was able to back in to and we then just carried the boxes down the street through the alleyway to the waiting van. The advantage of having that big truck was being able to get the moving job finished much faster than we anticipated. What we did not anticipate was one final roadblock when we went to return the van. With less than an hour remaining before we’d have to pay for an additional day, we drove up to a traffic circle where a motorcyclist had fallen off her vehicle, perhaps a minute before we arrived. She was already being helped but cars were stopped in all directions. The driver apparently wasn’t seriously injured and we were soon on our way. Back at the rental agency we were able to confirm to the agent that the van was très confortable, just as we plan to be in our new home.

Posted on January 29, 2017, in Life in France and tagged Americans in Carcassonne, Housing, Rent. Bookmark the permalink. 4 Comments.