← All dressed up
Serendipitous Strasbourg →

On the border of Christmas markets

Welcome to the Christmas markets of Strasbourg

When we moved to France in 2016 it was the year of our 30th anniversary. Well before we knew that we’d be living overseas we came up with a variety of possibilities for celebrating that happy occasion. We’d had lots of fun on cruises so a transatlantic crossing, sailing from California to Hawaii, Greek Island hopping, and a big friends and family reunion cruise all made it to the list. Since we had rented European castles together with friends a few times, having a big Downton Abbey style party somewhere in the countryside with friends from both sides of the Atlantic sounded great. So did rail trips, especially if they took us to wine destinations like Bordeaux or Cognac where we had not yet been. What about combining cruising and the train with a trip on the Rhine river, returning on the tracks running beside it? If we waited until December we could fly over for the Christkindlmarkts (Christmas markets) in Germany and  les marchés de Noël in France. So many choices. 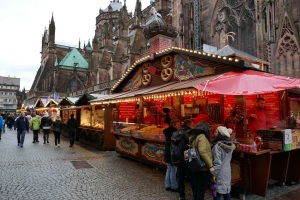 We were looking to do something big and splashy, of which any of those above could have qualified, but we chose instead something that never was on the list for that year but still rather dramatic: move to France. Much easier. After all, those flights across (and back across) the ocean were eliminated for any selection that involved Europe. With December fast approaching it was time to check off another item by taking the train up to the northeast corner of France to Strasbourg, promoted as the “Capital of Christmas” to see their market plus others in Alsace, right on the border with Germany.

As usual, our favorite mode of transportation—the train—took us from nearly our front door to right downtown of our destination, this time within easy walking distance of our hotel and of this trip’s main attraction. Since 1570 a “Market of the Infant Christ” has been held each year in this beautiful French city and we went there in time for the grand opening of the festivities. Place Kléber was one of the 11 sites around town where we saw the traditional wooden huts where vendors sold food, drink, toys, decorations, and souvenirs appropriate to this time of year. The unique feature of this square is the 30-meter (about 100 feet) tall Great Christmas Tree, the lighting of which signals the opening of the Marché de Noël.

With only a week to walk around nearly a dozen markets, and that was just within the city of Strasbourg itself, we had to be pretty selective. After all, tradition says that you must have a warming glass of mulled wine (vin chaud in France or gluhwein in Germany) at each stop just to keep the chill away, so we wouldn’t want to overdo that, now would we? The theme choices we had included classic, modern, Delights of Alsace, the three Magi, the Golden Square, the country of Iceland, the Invincible Small Producers of Alsace, and others. We did our best to respect all the traditions we encountered at each stop.

The bonus on this trip was three-fold. The Christmas markets were our goal, but Strasbourg has lots of historical interest that we got to see and I’ll write a separate post about that. When we vacationed in Alsace 4 years ago, we were taken by the beautiful town of Colmar so it was fun to return to see it all dressed up in its finery. Getting to spend a weekend with our longtime French friends, Michèle, Christian, and Lilou definitely put us in the holiday spirit. Joyeux Noël and Merry Christmas! 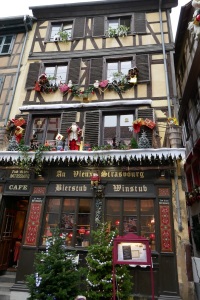 Posted on December 24, 2017, in Life in France, Travel in France & beyond and tagged Americans in Carcassonne, France, Markets, Wine. Bookmark the permalink. 5 Comments.