The umbrellas of C…? 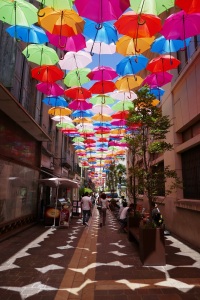 Did you ever see the movie from the 1960s starring Catherine Deneuve entitled The Umbrellas of Cherbourg? It takes place in that French port city along the Normandy coast and tells the story of two young lovers separated by war and then reunited years later. By the time the soldier returns, however, the woman has married someone else although it is clear that she still longs for her first love.  The film features the song I Will Wait for You but that clearly didn’t happen as the two main characters go their separate ways. Flash forward 50 years to a much happier take on that theme, at least as far as those umbrellas are concerned.

Summers in Carcassonne are never quiet as far as things to do and see. The medieval walled Cité receives up to 3 million visitors a year, most of whom arrive in July and August. The fortress alone is well worth the visit but it becomes even more spectacular with the nightly addition of the light and sound show on those walls with a 2000 year history. The month-long Music Festival with national and international stars has several stages all over town for hundreds of concerts, up to half of which are free. That’s followed in August with La Feria to celebrate the music, dance, food, and drink of our neighbor to the south, Spain. 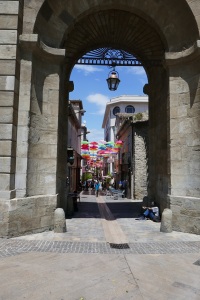 City gate with umbrellas in the distance

Although much of the world knows July 14th as Bastille Day, in France it’s known simply as la Fête nationale that we might call the National Celebration and in Carcassonne it is far from the word “quiet” that I mentioned above. It takes weeks of preparation to get all of the fireworks in place that light up the sky for almost 30 minutes of non-stop excitement. There’s a link called Embrasement de la Cité over in our blog’s right hand column that will show you 5-minute highlights from 2016.

But wait…there’s more! In addition to all of this that goes on every summer, this year we have the bonus of the Tour de France coming through town. The riders arrive here on July 22, spend 2 nights and then depart before noon on the 24th. Bill has his camera ready and I look forward to writing the blog post about all the activities planned around this famous event. 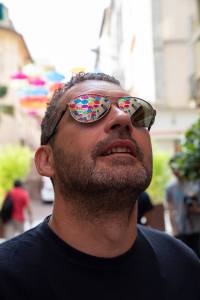 Now, about all of those umbrellas—there are 3000 of them that line about half a mile (800 meters) of the main pedestrian shopping street in the lower town, the Bastide. According to the newspaper, the idea got started in Portugal and has traveled as far as Tokyo with Miami being next on the list of installations. The mayor’s office here says that the exhibit is just to “catch the eye” of tourists and residents alike for the summer plus provide a bit of welcome shade to the well known mid-day sun in the south of France. We did exactly that by stopping at a sidewalk café, cooled by the umbrellas above, for a glass of chilled rosé wine. I’m pretty sure we’ll be going back there where, as the song from the movie says, “I will wait for you.”

Posted on July 15, 2018, in Life in France and tagged Americans in Carcassonne, Carcassonne, Community. Bookmark the permalink. 1 Comment.