We’ve been wanting to visit Annecy at least since we moved to France two and a half years ago and probably long before that given how many travel videos about this country we used to watch in the US. Since the train is our preferred mode of transportation and it generally takes 2 changes to get there from Carcassonne, we’ve put it off. When Bill was planning our trip in northern Italy he saw that on our return we could stop overnight in Annecy and then get one direct train from nearby Lyon to our station at home. If it really were that easy (true confession at the end of this post) then we were off to see this city in the Alps! END_OF_DOCUMENT_TOKEN_TO_BE_REPLACED

One of the best tips I saw online about visiting Italy was that your trip should not be rushed. You should take the time just to observe the life going on around you. Of course, this advice was accompanied by a photo of a canal-side café table bearing a glass of wine and a plate of tapas. With that in mind, I took my Top 10 list (19, really) of what to see in Milan compiled from our two favorite travel websites, and pared that down to half its original size. Surely we could make it to nine sites in about 2 days time, right? Considering that we were in one of the world’s fashion capitals and only about a 20-minute walk from a showcase of designer-everything, it made sense to head for Galleria Vittorio Emanuele II, a soaring iron and glass arcade built beginning in 1865 and at the time was Europe’s largest shopping arcade. END_OF_DOCUMENT_TOKEN_TO_BE_REPLACED

Comments Off on Milan in 2 days

The Grand Canal by the train station

There are many cities around the globe that either have the word “Venice” as part of their actual name or use it in an effort to attract tourists. In that second category we have several listed as the Venice of the North, including the Netherlands’ Amsterdam, Brugge, Belgium, and Manchester, England. To the west in Ireland are Shannon and Monasterevin and to our south is Aveiro, Portugal and Empuriabrava, Spain. Not to be left out, France has Nante, Sète, Annecy plus Colmar and to the east across the border is Bamberg, Germany. We’ve been lucky enough to travel to almost all of those places and when we lived in Los Angeles, a short bus ride took us to the beach at Venice and on the opposite coast we even had Venice, Florida on our list of possible retirement spots. There are apparently 11 cities with that name in the US but Italy has only one and it was time to see the “real” one. END_OF_DOCUMENT_TOKEN_TO_BE_REPLACED

The hills above Genoa

Given that our destination was on the Italian Riviera and is the second largest port on the Mediterranean Sea, it seemed only fitting that our journey would begin at the Sea’s largest port and hug the coastline of the French Riviera. In keeping with that theme, we started on a French train from Carcassonne and transferred to the Italian Thello once we arrived in Marseilles. Familiar sounding city names such as Cannes, Nice, and Monaco appeared outside the window on the passenger platforms where we stopped but then after emerging from a tunnel the station names took a definite change in spelling. First we saw Vintimille, then Sanremo, Diano, and Alassio meaning that we were definitely in Italy with dinner waiting for us that evening in Genoa. END_OF_DOCUMENT_TOKEN_TO_BE_REPLACED 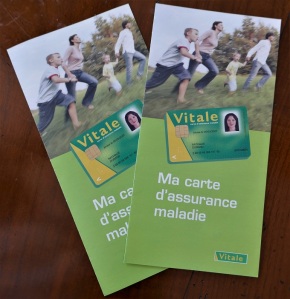 Everyone who lives and/or works in France is required to have health insurance. In fact, it’s treated as a fundamental right in the Constitution with the Preamble stating that the Nation “shall guarantee to all, notably to children, mothers and elderly workers, protection of their health….” When applying for our visa that allowed us to stay here during the first year we had to prove that we had health insurance coverage that would take care of any emergency situations plus pay for sending us back to the US for treatment of anything serious and/or long term during the one-year validity of our visa. A common benefit of travel insurance is repatriation to the country where your trip began, so a policy for that was easy to find and accepted for the visa application. Once you’ve lived in France for at least 3 continuous months you become eligible to apply for Protection Universelle Maladie that we think of as universal health care and we have now been accepted. END_OF_DOCUMENT_TOKEN_TO_BE_REPLACED

Posted in Dealing with government, Life in France

Mayor and family from Eggenfelden, Germany

Bill and I have a long history with Germany. Soon after we met I somehow convinced him to go with me to an intensive, full immersion course in Cologne to learn the language. He was even courageous enough to telephone the non-English-speaking family we were going to be living with to tell them our arrival details. In the 30-some years since then we’ve returned many times, always traveling by train to discover another part of the country we had never visited. Having said that, Munich has appeared on our itinerary more than once including a few days one year at Oktoberfest. It was exactly as we expected, if not more, but we figured that a single stopover there would be enough. Then a few weeks ago our neighborhood wine merchant (caviste Jean) asked us if we were going to Oktoberfest. The quizzical look on my face led him to hand us a flyer about the celebration we went to on Saturday night. END_OF_DOCUMENT_TOKEN_TO_BE_REPLACED

Comments Off on Oktoberfest in France

Renestance
A new life in Lille