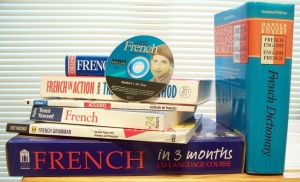 This morning I was listening to a song where the lyrics included “I don’t want to be apart from you” which is clear enough to native English speakers, especially when you can see it in writing. As an exercise, I often try to translate in my head phrases that I hear. It went fine until I got to the word “from” which many of you will know in French is de that also means “of” plus at least half a dozen other words in English.

Imagine your love interest’s reaction if you said out loud to her/him “I don’t want to be a part of you”. Not exactly the world’s most romantic phrase. We had read that French was the original language of diplomacy for many reasons including its preciseness. What kind of friend are you? There are words to describe each of the 7 levels. What kind of cheese do you want? There are at least 400 distinct types, each with its own name. Ask an Eskimo about the weather and you could get 50 different responses to say that it’s cold. But ask a French woman/man the same thing and you’re likely to hear the one word froid meaning cold, cool, chilly, frigid, and a few other choices.

The lesson from all of this? None–just have fun communicating. It’s unlikely that we’ll be needing to speak as diplomats, so I’m just going to be happy, for example at a restaurant, when I think I’ve ordered fish but I get beef instead. As long as there’s a glass of wine to go with it, we’ll be fine.

Posted on November 23, 2015, in Life in France and tagged Americans in Carcassonne, France, Life in France. Bookmark the permalink. Comments Off on No wonder we’re confused.