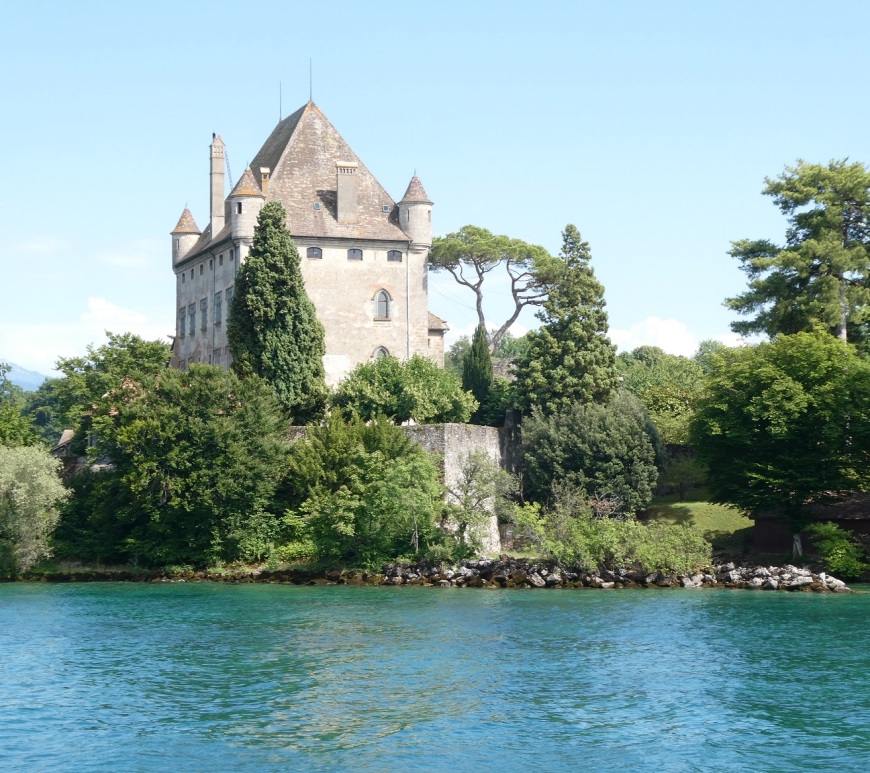 During the first part of our visit to Geneva, we had spent most of our time on the eastern and southern shores of the lake, so we crossed the bridge for the day. We’d been to the United Nations in New York and now we wanted to see its equivalent at the Palais des Nations (photo on the left) where 25,000 delegates meet each year. We didn’t have time for a guided tour indoors because within the Palais park grounds we wanted to see the Ariana Museum that houses thousands of examples of glassware and ceramics from the Middle Ages through the 20th century and to have a school lunch.

END_OF_DOCUMENT_TOKEN_TO_BE_REPLACED 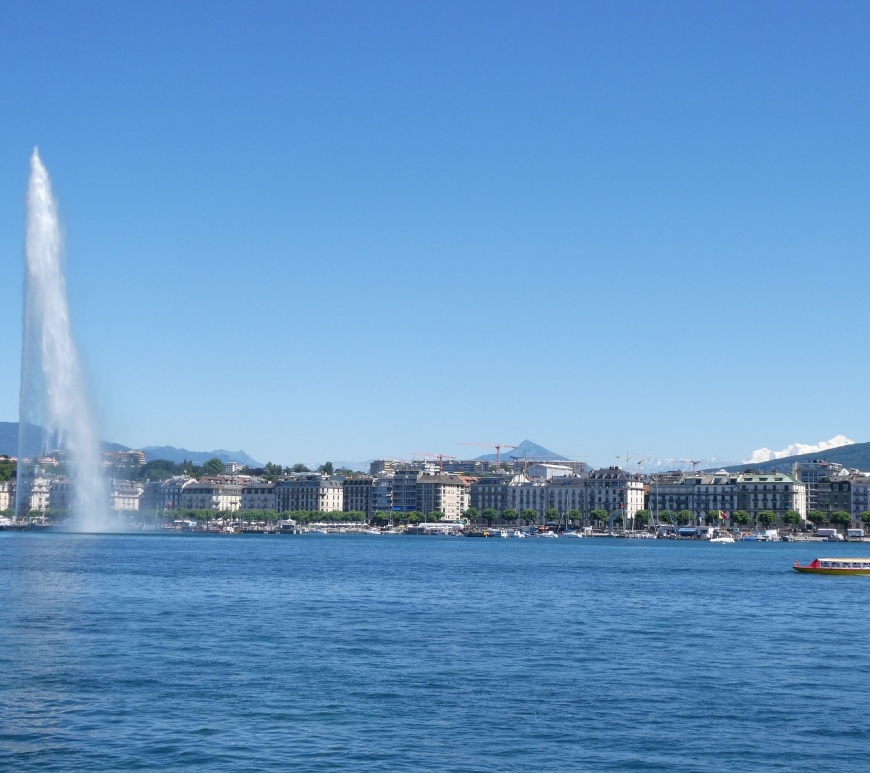 We’ve now lived in Carcassonne for over 6 years and during that time we’ve had lots of family and friends from outside of France visit us here. When we have the opportunity to see some of those same folks again, we like meeting up with them elsewhere in Europe that gives all of us the chance to see something new. That was the case with our English friends, Gaynor and Pete, who were attending a reunion in France near the border with Switzerland. Since they had to fly into Geneva and we could easily get there by train, that made a logical meeting point for the four of us.

END_OF_DOCUMENT_TOKEN_TO_BE_REPLACED

In the UK we have seen highway signs proclaiming “Britain’s Tidiest Town”, “Tastiest Cuppa” for tea lovers, and even “Cleanest Loo”, all to indicate that a community had been awarded the nation’s top honor in a certain category. France has similar declarations that are proudly posted at the roadway entrance including “Most Beautiful in France”, “Village in Bloom”, “City of Art and History”, and “Active and Sportive”. The level of achievement, typically from 1 to 4, is indicated by the number of stars, flowers, Olympic laurels, or other appropriate symbols based on the theme of the award. Carcassonne has won many of these and thanks to the Tour de France that whizzed through town last weekend, we also have a bicycle emblem as a Ville à Vélo otherwise known as a City by Bike.

END_OF_DOCUMENT_TOKEN_TO_BE_REPLACED

There’s a link in the right hand column on this page to a 5-minute video that condenses the half-hour fireworks display over the medieval walled Cité of Carcassonne on July 14, 2016. That was just a few months after we had moved here and it was quite the introduction to our first Bastille Day in France, except no one here calls it that. Officially it’s “‘la Fête Nationale Française” although we typically hear simply “la Fête Nationale” or even “le quatorze juillet” just as in America we might say “the fourth of July” instead of the more formal “Independence Day”. In researching the history behind this holiday I discovered some fascinating connections between George Washington, Thomas Jefferson, and Bastille Day.

END_OF_DOCUMENT_TOKEN_TO_BE_REPLACED

When we’re on vacation we encounter a lot of people and inevitably in conversations the question of where everyone is from comes up. If we’re talking to French people there is instant recognition when we say, “Carcassonne”, and with other Europeans once we initially say “France” and then add our city, they too seem to know the place. After all, it is Europe’s largest fortified medieval city that is surrounded by 3 kilometers (1.9 miles) of double walls enhanced by 52 towers for surveillance and defense (photos above). In a busy year there can be 3 million visitors, half of whom are Spanish, one quarter French, with the remaining quarter coming mostly from the surrounding countries. That, plus the article highlighted below might explain why, if we meet an American on our travels, we almost always hear, “You live where?”

END_OF_DOCUMENT_TOKEN_TO_BE_REPLACED

While the French government has a minister in charge of ecology and one for renewable energy, those jobs are combined in Carcassonne with the Deputy Mayor for the Environment, Monsieur Arnaud Albarel. He announced several projects that the city would be undertaking this summer “in its fight for the preservation of biodiversity”. This includes redeveloping all municipal green spaces around parking lots, river and canal sides, and city buildings by using plants essential to pollinating insects, especially bees, plus instituting water-saving methods. For public involvement there are workshops to raise the awareness of young people to the importance of protecting the environment and a contest for residents to decorate their balconies and home fronts with window boxes. In addition to the positive ecological impact, these measures should ensure that Carcassonne maintains its status as a Ville Fleuri, that is, a City in Bloom.

END_OF_DOCUMENT_TOKEN_TO_BE_REPLACED

It’s taken a month’s worth of blog posts to describe our two-week trip to Spain, but that’s what slow travel is all about. No longer are we limited to 10 days of vacation, where we had to jet across the Atlantic Ocean to Europe and then try to jam in as many destinations as possible to make the journey a good value. This trip began and ended as do most of ours these days by a walk to/from our local train station, a relaxed meal onboard with time for reading and listening to music before exiting the train at a downtown station and walking to our overnight accommodations. For this trip’s last night in Spain we were in San Sebastián (cathedral photo on the left), one hour south of the French city that we found to be very similar, Biarritz including lots of Bs: Beach, bay, Basque, and beauty.

END_OF_DOCUMENT_TOKEN_TO_BE_REPLACED

All experiences and opinions expressed on this blog are our own and may not apply to your situation.