House soon to be sold

Yes, it’s a sign that it’s time to move on. I was a bit apprehensive about the visit last Tuesday from real estate agent, Pat. This was the first time for her to see our house so naturally we wanted to make the best first impression we could on the person we will be paying to sell the place. We also had a couple of conditions that we wanted to talk about with her; something not at all unusual in France but definitely out of the ordinary here in the US.

If you are a potential house buyer in France, I understand that it’s common for the homeowner to accompany you and the real estate agent as you tour the property in case you have any questions. Bill, much to the relief of our agent, will indeed be doing that with our house, explaining how the computer controls the lights, how the theater operates, what buttons to press to get the same music playing from the basement to the bonus room over the garage, etc. Since those features and more make the place unique, Pat felt it would be a great selling point to have someone knowledgeable present. While Bill is playing tour guide, Heather and I will be going for long walks and/or short drives, parking next door in our neighbor’s driveway in case the potential buyers would be put off by a friendly dog.

Hopefully while people are inside touring the various rooms, the house will behave although it definitely did not on Tuesday while we were waiting for our agent to arrive. Back in August we published a post about how something always breaks inside the house while we’re away on vacation. It all started this time as we were putting the finishing touches on getting the whole place to sparkle. Real estate professionals suggest turning on all the lights, which we did, except that the ones illuminating the stairs to the basement would not come on. As soon as Bill solved that problem, one of the lights in the pantry went out. He changed that bulb and then went into the theater to make sure that a colorful movie would be playing to show off the 10-foot wide screen to full advantage. Although we’ve watched Finding Nemo several times on this very screen, now the only thing projected onto it were the words “Can’t play this disc”. As always, Mr. Fixit fixed it and then moved onto his final challenge for the day. 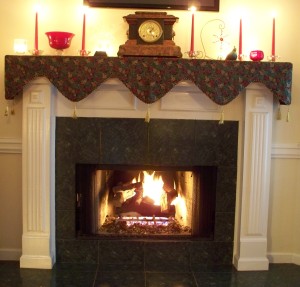 Here we were, officially into winter and, we thought, the perfect time to have a fire going in the living room  fireplace to provide a warm welcome. Since this is Atlanta where the word “winter” can sometimes mean “sort of summer” we had to turn on the air conditioner to make it cool enough to have a fire. Big mistake. Suddenly the house that we had so carefully cleaned, sanitized, and freshened was filled with an awful odor literally 10 minutes before our appointment. Quick-thinking Bill grabbed a can of air freshener, sprayed some into the air intake grate, and just as suddenly as it appeared that odor was eliminated. It must have worked because later when we were talking with Pat about how I would take Heather away from the house for any showings she said that there was no dog smell nor any odors at all.

Although we had paid for an inspection a month ago and made the few corrections that were listed on the report, we still wanted to know if we needed to do anything else to stage the house for a rapid sale. I guess all those years of watching home selling programs on TV paid off since Pat’s reply was “don’t change anything”. If you’re in the market for a new place to live a bit outside of Atlanta, the Georgia MLS record number is 7566012.

So, as Petula Clark (remember her song from 1966?) would say it’s “A sign of the times, and I know that I won’t have to wait much longer”. And that’s the truth!

Posted on December 26, 2015, in Before leaving the US and tagged Downsizing, Housing, Move to France. Bookmark the permalink. 2 Comments.