Heather is going to sleep well tonight. In fact, it’s only 2 PM and she’s already napping on her favorite pillow on the sofa. Up to now we’ve been walking along the river that provides the tranquil, green environment that lends itself to relaxation. Today we ventured into the city for the first time with her since we’d like to take her wherever we go and dogs are typically welcome into most businesses. We may have to rethink that.

This morning I saw that there was a Pétanque championship taking place at the stadium that is about a 30-minute walk from the house. I think of Pétanque as a game of horseshoes that uses hollow metal balls instead of the metal shoes and a small wooden ball in place of the wooden stake. We’re not yet big fans of the sport but I thought it might make a fun photo for the blog and gives us a good introduction to something enjoyed by the French. The sports complex is right by the river so most of our journey up there was along a path that Heather would have found a least partly familiar. Unfortunately, because the weather was cool and rainy this morning, the match was cancelled but at least we got to see an area of town we’d not been to.

Then we went over the bridge that crosses the Aude river we had earlier been walking beside. Being a street with a bridge, it’s busy and noisy and I even commented to Bill about how much louder it was now that we were surrounded by stone buildings. Heather noticed too since her gait slowed down and she appeared to be quickly tiring. I picked her up to give her a rest and noticed how much she was shaking. We got off that main road, onto a much less hectic side street and then into a park where she wanted out of my arms to resume her normal pace.

Our other destination was a street fair that advertised vendors of all sorts, food and drink, rides for the kids, and just a general fun day out. Again we’re not big carnival fans but also again, it would be another chance to experience life as a local. The rain had taken its toll on this event too which was probably just as well since a little 15-pound dog only inches above the ground might not have found the chaos of a fair fun. 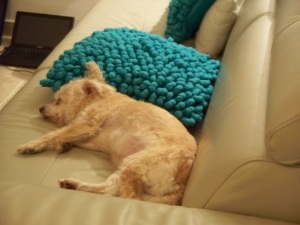 The route home took us back along the river and into much more familiar territory. For the future we think that the tree-lined river path will give us some exercise that we need and the calm environment we want for Heather.

Posted on March 18, 2016, in Life in France and tagged Americans in Carcassonne, Carcassonne, Community, Pet travel. Bookmark the permalink. 3 Comments.