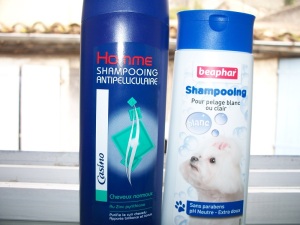 Shampoos for men and dogs

When friend and fellow blogger Tracy was trying to encourage us to start this blog, she said that just about anything we did or saw could become the subject of a post. I’m not sure that she had this post’s title in mind when she wrote a few months ago “even the French shampoo you use on Heather” could be something to write about. You see, in France you have to add an “ing” to the word we use in English to wash our hair. The attached photo should explain everything.

Supposedly 60 percent of English is of French origin, so it’s no wonder that there are lots of words that are either the same or at least share a common root. But then what fun is that? Let’s talk about faux amis or false friends that appear to be one thing but can be something totally different.

In this land where the grape is king, it’s actually called a raisin and a plum is a prune; the drying is already done for you. In Carcassonne if you ask for a blanquette to keep you warm, it might, but you’d have to drink it as it’s a local sparkling wine.

Looking for bras? Your hand is attached to it: your arm. The verb s’introduire looks like it should be to introduce but it’s not the thing to say when you’re meeting people for the first time since it means to penetrate. I’ve actually made the mistake of using the verb exciter with friends, intending to say how much we were looking forward to seeing them. In French it means to be aroused. Oops.

Posted on May 13, 2016, in Life in France and tagged Americans in Carcassonne, Life in France. Bookmark the permalink. 2 Comments.