← And they’re off!
Truth or marketing? → 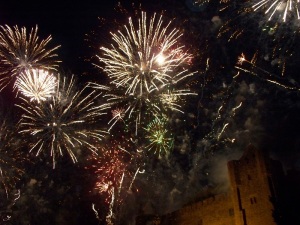 Fireworks over the castle

It’s hard to compete with the sight and sound of a 30-minute non-stop fireworks show that never stops to take a breathe or to let you do so either. Imagine sitting at the base of the castle above which all of these explosions are going on every few seconds and you’ll know what we did last night to celebrate the July 14 Fête Nationale or what we know as Bastille Day. 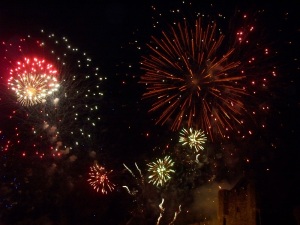 Starting in 1898, the city of Carcassonne has had a mid-summer illumination that has grown bigger and attracted larger crowds every year over the last 100+ years. It takes months of planning and two weeks to hoist the 15,000 bombs over the castle walls that light up the sky for half an hour. Last week’s post about the preparations includes a photo of a modern crane beside those 900-year-old walls. I find it ironic that this gigantic fortress that was never conquered appears to be “set ablaze” every year in this incredible outdoor show where those glowing red flames are extinguished by cascading white sparklers that look like water flowing over the walls.

What an amazing job the city has to do to each year when over 700,000 spectators descend on this town of 50,000 inhabitants for the day and well into the night. Visitors are advised to arrive early since the downtown streets are closed from 9 AM onward with the surrounding roads barricaded by 1 PM. It was a walker’s paradise to go from our house on foot to the center of the city, never once having to watch for cars as we crossed the motor-less streets. That said, we definitely did have to maneuver through scores of people camped out on the banks of the river and in the 2 parks between us and the city, since everyone had put their blankets, chairs, and coolers anywhere that would give them a good vantage point of the castle. Food vendors had set up early to tempt these short-term campers with sausages, fries, sandwiches, all kinds of snacks, and of course, wine. It was just one big festival. 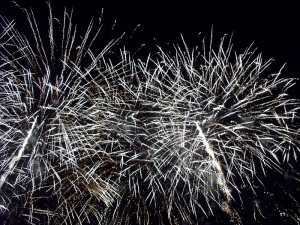 We were lucky enough to have been invited to a party at our neighbors’ house where their backyard looks right up into the castle. To give you an idea of just how close we were, the stone wall that runs along the back of their garden was once part of the castle’s prison used during the Inquisition against the Cathars during the 13th century. After an enormous dinner that included nine kinds of curry dishes, we all rushed upstairs to get a clear view of what you see in the attached photos. If you’ve been on a roller coaster that has pulled you through an exhilarating ride, screaming until the end, leaving you with tears in your eyes and “wow” on your lips, you’ll know a little of what last night was like. Don’t forget to add in the sounds of thousands of exploding bombs that sometimes shook your whole body. The rest of the summer is going to seem rather calm compared to last night’s celebration.

Here’s a link to the city’s Facebook page with a few photos taken from across the river to show you just how much of the sky was lit up. Magnifique!

← And they’re off!
Truth or marketing? →
Renestance
A new life in Lille