← Sunday in the village
If they only knew → 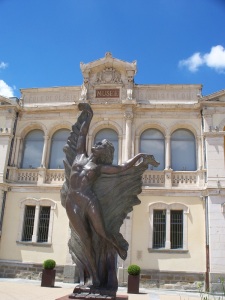 Fly away to the Museum of Fine Arts

In elementary school, one day a week was devoted to art. Although it was not a subject at which I excelled, I still looked forward to those days because it meant that we could temporarily put aside long division, cursive writing, and vocabulary lists in favor of crayons, colored pencils, and poster paint. Bill and I had our own grown up version of Art Day last week and we didn’t even have to get messy. 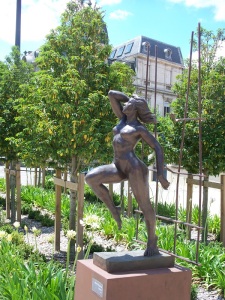 I call this statue “Superwoman”

You might have read our blog post about all of the places around town where art is on display, many of them government buildings. Since it was a sunny day, we set off to see how many exhibits we could visit between lunch and dinner. City hall and other similar offices are usually open until 6 PM and close for an hour mid-day so our first stop was outdoors. Square Gambetta had received a 1 million euro renovation one year ago and sculptor Marta Solsana was invited to bring 11 of her works to temporarily join her bronze Girl Touching Water statue that is on permanent display in the park.

One end of the square is dominated by the city’s Museum of Fine Arts that was in the process of installing their newest feature by designer Mattia Bonetti so we moved one block west to the Dominican’s chapel that the city opened only a few months ago as a gallery and highlighting painter Caroline Vicala. Walking a few blocks further west brought us to the Jesuit’s chapel, where photographs by Tina Merandon were hanging on walls that the city saved from ruin. Moving on to a more traditional government building we next stopped into the former city hall where the Cité Quilt Association was displaying at least 4 dozen of their best projects. Since Bill’s mom was an avid quilter we especially wanted to see this exhibit.

The last stop for the day was a little strange for us because it was in a working government building where we were admiring drawings, paintings, and photographs amid office workers who cheerfully greeted us and welcomed us to their ever-changing wall displays. I’m not sure that I’d be able to get my job done while strangers were gathered around my desk staring at a piece of artwork over my head, but they must be used to it.

What’s left? At least 2 other government buildings and then we can start visiting the private galleries. The best part is that we get to look at all of this art for free and almost every week there’s something new to see. We would have to try really hard to be bored.