No, not what you think; this is a G-rated blog. It’s all about paint, maybe almost a hundred year’s worth. Although our house was built in 1925, from what we can tell, most things like doors, windows, electricity, and plumbing have all been replaced and that’s a good thing. I remember as a child crawling around the attic of my grandmother’s house that was built about the same time as our new place and being fascinated by the knob and tube electrical wiring, a process that Thomas Edison had patented only a few years earlier in 1892. There is one interior door and its frame, however, that appear to be original and we set out to discover what was under all that paint.

The previous owners must have had the same idea about this particular door since among the various cans of cleaners, waxes, and varnishes they left for us were a couple of brand new cans of paint stripper. We’re not big on using heavy-duty chemicals around our home but since these were already there and we had a project waiting, we figured: why not? Suitably garbed in thick rubber gloves and safety glasses, Bill applied the first can to the front of the door and within minutes we had the crackly appearance of an antique treasure. Half an hour later this had all turned to a gummy mess that he was able to scoop up with a spatula and place inside a cardboard box for disposal. And what was underneath? Just a plain old door that had seen a lot of service, given the patches that had been made to it, but still solid as it could be.

While that process worked well, we wanted to see if an alternative method that didn’t involve chemicals might do the trick. For not a lot more than the cost of one of those cans of liquid paint stripper, we bought an electric heater gun with a maximum temperature setting of 600 degrees C, which is just below the melting point of aluminum and twice the flash point of wood, as I found out firsthand. Dressed in a similar style to Bill, although I exchanged the rubber gloves for leather ones, I gingerly held the gun close to a small part of the surface of the door and within seconds the paint began to bubble which made it very easy to scrape away down to the same surface that had previously been exposed by the liquid stripper. It’s not a fast process and sure, there are some burn marks where I got a little overzealous, but we’re painting the door anyway so who’s going to know? 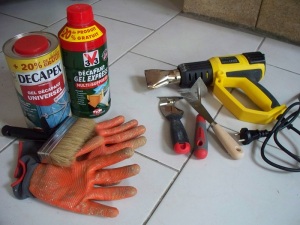 With similar results from both processes, how do they otherwise compare? If mishandled the chemicals can be toxic to humans and the environment, producing a gooey residue that captures any lead in the paint but at least the clean up is with water instead of another chemical. The heat gun can release lead into the atmosphere, might cause damage to the wood and/or 3rd degree burns to the operator, but the melted strips of paint cool quickly and are easily picked up for disposal. It can also be used to ignite charcoal briquettes in your barbecue grill precluding the use of lighter fluid or as we call it “smoke flavoring” that you might have read about in our Mistaken Identity post. That sounds like a great use for it from now on, starting with tomorrow’s turkey. Happy Thanksgiving!

Posted on November 23, 2016, in Life in France and tagged Americans in Carcassonne, Housing, Life in France. Bookmark the permalink. 1 Comment.