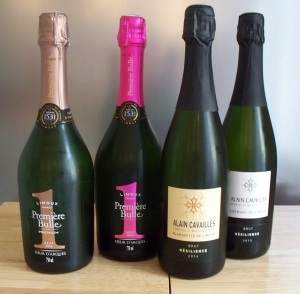 Sometimes I mishear things. It’s not that I’m going deaf; it’s more about concentrating on every single word that someone is saying in French which opens up multiple opportunities for misunderstandings. Last Saturday at the market we saw a friend who asked us what we were doing that evening because she was fixing a blanquette de veau (veal in cream sauce) and would love us to join her and several neighbors for dinner. We were definitely not going to turn down a wonderful chance like that especially when it meant we’d get to spend some time with people we hadn’t see in a while. On the walk home, Bill and I discussed what wines we should take and we settled on some bottles of Blanquette de Limoux. After all, if dinner was going to be a blanquette why not accompany it with a few glasses of blanquette?

We stopped at two wine stores along the way to make our selections and then popped them into the refrigerator as soon as we got home. It was while I had my head inside the fridge that Bill asked a question that made my blood run cold. I knew that he was saying something about dinner, but all I heard him say was “tête de veau” and then the panic set in. Do you remember the children’s song in French called Alouette about plucking the feathers from a bird? The song starts with “je te plumerai la tête…et la tête, et la tête” that they repeat twice just to make sure you know that the singer is going to start at the bird’s head. While these veal recipes, both the one I thought we were going to have and the one I thought Bill was asking about, are classic and traditional, I did not relish having the one where dinner was going to look back at me. 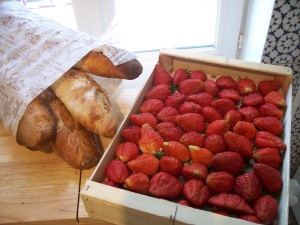 Lemon-sized strawberries from the market

When I emerged from the kitchen, apparently with a strange look on my face, Bill knew immediately what was wrong and assured me that while I’d misheard his description of dinner, we were both there when our host said that she was preparing a blanquette (pronounced blan-KET) as the main course. He reminded me of the play-on-words logic of taking the bottles of blanquette. Relieved, but still cautious, we stuck a couple additional bottles of red wine in my backpack, just in case we needed a bit more “courage”.

A few hours later we were in the company of friends, circled around the dinner table when the main course was served. YES!, as people here exclaim when something is going their way, we were having tender, bite-sized chunks of veal shoulder cooked with onions, carrots, and mushrooms then enrobed in a thickened butter and cream sauce. Our glasses were filled with a hearty red wine from the Clape region, 30 minutes to our east at the Mediterranean Sea, and a lively discussion of politics ensued. The cheese course of 5 regional varieties came next and we capped off the evening with a fresh strawberry tart. We walked home satisfied that there was definitely no misunderstanding about having had a nice time with new friends.

Posted on July 9, 2017, in Life in France and tagged Americans in Carcassonne, Community, Food, Markets, Wine. Bookmark the permalink. 2 Comments.