As the crow flies, we’re only about 50 miles (80 kms) from the Spanish border but it hasn’t always been that way. Prior to 1659 the fortress here in Carcassonne along with 5 other area castles known as “The Sons” stood watch over the frontier just a few miles away. After the Treaty of the Pyrenees was signed the division between France and Spain moved south to the highest ridge of the mountain range of the accord’s name where it still remains. Given the centuries of rule that our neighbors to the south maintained in this general region it’s no surprise that their influence still exists today. A celebration of that culture is observed every year in Carcassonne with the arrival of La Féria! 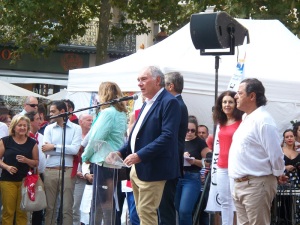 The mayor opens the fair

For 4 days, our French city turns Spanish with the arrival of wandering bands, folk dancers including rumba, flamenco, and the Sévillanes from Seville and a village of bodegas selling traditional food and drink. Nightly free concerts featuring well-known Spanish groups fill the streets and the air with music, light, and dancing. Even many of the local restaurants that typically serve French cuisine create special menus to join in the fun. With all of this exciting activity going on all around us, only a short walk away and most of it free, you can guess where we’ll be this weekend! Olé! 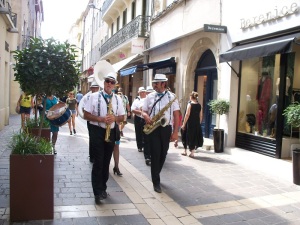 Our féria bandanas from the opening ceremony

Part of the féria brochure

Posted on August 25, 2017, in Life in France and tagged Americans in Carcassonne, Carcassonne, Community. Bookmark the permalink. 1 Comment.