The fortress in Carcassonne

Although we tend to use March 1 as the starting date for our new life in France, the government here considers February 20 the date since that’s when our initial visa began. Americans can enter the country for up to 90 days on their airline ticket alone, but for those of us who didn’t buy a round-trip flight, you have to do a bit more work. During that initial grace period you must schedule a medical appointment with the immigration office who will then stamp your visa as valid for an additional 9 months. At the end of your first year you can trade in the visa for a residency card that must then be renewed annually using essentially the same documentation required to come here in the first place. Basically you must prove that you won’t be a burden to the taxpayers in that you have sufficient income, health insurance, housing, etc. to take care of yourself. This week we again succeeded in doing that so we have brand new residency cards.

Generally speaking, we don’t have a lot of contact with government agencies. That first year we visited the immigration office once and since we had rented a fully-furnished house that included our utilities and even our local taxes, that was the only official visit we had. Starting with your second year, foreigners are dealt with by the local representative of the federal government called the Préfecture. Although there are national guidelines that offices can follow, they are given some leeway as far as what documentation locals within their jurisdiction must provide. I went to the welcome page http://www.aude.gouv.fr/ for our area and followed the prompts that led to those general suggestions of what to bring: your current residency card, your passport, a utility bill, 3 passport-size photos, a handwritten letter saying that you do not practice polygamy (only required if your home country allows it), and the tax stamps to pay for the renewed card. 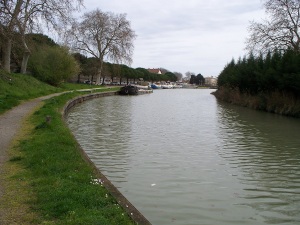 Rambling along the canal near the train station

How did that list compare with what our local office really wanted? A personal visit there in November, exactly 3 months before our ability-to-stay expired, provided us with an appointment for February 5 and the directions to bring an original and a copy of the following for each person: your current residency card, passport, marriage license, proof of income including bank statements, a handwritten letter promising not to work in France, a utility bill, 4 passport-size photos, a self-addressed stamped envelope, and tax stamps of 269 euros (about 310 US dollars). Since that was exactly what we had to provide last year, putting it all together was a breeze.

On the morning of our appointment we arrived at the Préfecture to find the waiting area already busy. At the reception desk where they hand out numbered tickets, not unlike what you might find at a supermarket delicatessen counter, our names were checked off the appointment list and we were given numbers 703 and 704. The digital display on the wall that showed the number currently being served read 506. Luckily, since we had a reservation, we had each been given what Disney parks call a FastPass that allows you to skip ahead of everyone else. Our numbers were called out, rather than being displayed, and 15 minutes later we had turned in all of our documents, received a paper receipt with one of those 4 photos attached, and were told that we’d get a text message when the new cards were available for pick up. That notice arrived 4 weeks later. We’re set for another year!

Posted on March 11, 2018, in Dealing with government, Life in France and tagged Americans in Carcassonne, Life in France, Visa. Bookmark the permalink. 3 Comments.