← What did we buy?
Confirming the big decision → 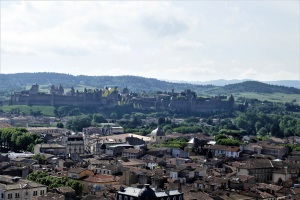 Looking across to the medieval walled Cité

When we were both in the travel industry we worked with a woman named Anne who specialized in trips to western Europe. To convince potential customers of the value of going with her company, she had cleverly calculated the cost of spending several days at a famous amusement park in Orlando, FL to see castles and landscapes created in a Hollywood studio to compare with a similar journey to England, Germany, or France, for example, to see the genuine massive fortresses that were in place centuries before a well-known mouse first piloted that steamboat. Anne succeeded well with that reasoning and we have long believed that history has much more meaning when you live it rather than just read about it. We needed that philosophy planted firmly in our minds last week to provide the push we needed to climb the 232 steps to the top of St. Vincent’s tower.

Carcassonne has a rich recorded human history that started with the Romans around 100 BC when they began the fortifications here that by the 1200s had evolved into Europe’s largest medieval fortress that we still see today. Across the Aude river from there, the “other” town developed from the two parishes that were once protected by that mighty castle on the hill. With two communities to be served, two churches were required: one is now St. Michael’s cathedral and the other, no less cathedral-like than it’s neighbor, other than the name is the church with its 16-story tower that Bill and I hiked up on Monday. It was Journée du Clocher (Bell tower Day) all across France with cities, towns, and villages joining together to highlight the heritage of these structures and to ensure their preservation. At a height of 54 meters (177 feet) I don’t think that there’s any danger that St. Vincent’s will be forgotten. It clearly stands out when you look in its direction across the city. 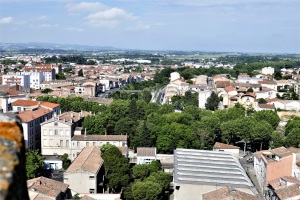 A peak at the water of the Canal-du-Midi

For a different perspective on Carcassonne, we took photos from that lofty height of places we were very familiar with at ground level including Place Carnot where sidewalk cafés surround the open air market held 3 days a week; the Canal-du-Midi (almost hidden by the cooling shade trees) that helps link the Atlantic Ocean to the Mediterranean Sea, and bright red poppy fields that will turn yellow in the summer when the sunflowers are in full bloom. It was fun to be standing where Louis XIV’s astronomer had been 300 years earlier to verify the prime meridian line from Paris to be followed by cartographers charting longitude and latitude. More menacingly, the tower has served as a defensive point with cannons pointing through the crenellated walls and as a shot tower to produce the ammunition smaller firearms needed. Today the sounds come from within those walls where a 47-bell carillon rings out during the week. We’ve been down at street level when the bells were ringing at full force and it was impossible to hear each other talking because of the echo in the surrounding narrow streets lined by tall houses. I’m happy that we had descended all of those steps to the bottom before the day’s concert began!

Red poppy fields at the edge of town

Posted on May 27, 2018, in Life in France and tagged Americans in Carcassonne, Community, France. Bookmark the permalink. 2 Comments.