From the city’s home page

We look at the city’s website every morning to find out what’s going on around town. Somebody once told us that in a French town if the mayor’s office doesn’t know about something then it doesn’t exist. Although we typically search for cultural events such as art exhibits and concerts or tasting festivals of regional foods and wines, it’s here that we discovered the AVF (Welcome Wagon) for new arrivals, sports facilities such as tennis courts and swimming pools open to everyone, and city bus schedules. When our trash can accidentally ended up inside the collection truck along with its contents, guess where we found how to order a replacement that arrived 2 days later. Now that school is back in session, a special note at the top of the front page caught my eye: School lunch menus. Other than curiosity, we have no real need to know what the kids we say bonjour to everyday on our street are dining upon, but this country does have an international gourmet reputation so let’s see how early that begins.

They start with a beet salad and vinaigrette dressing, continue with a turkey croque-monsieur sandwich accompanied by parsley green beans, a flavored yogurt, and fresh fruit. The next day you’ll be greeted with a cheese crepe, sliced chicken breast in a cream and mushroom sauce accompanied by sauteed carrots, Cantadou cheese from Provence, and a puree of fruit. Four courses for every meal but I don’t see a glass of wine listed. Perhaps that’s because these are the menus for kindergartener and elementary school children.

Fresh fruit from the market for ice cream

We bought an ice cream maker and like most appliances in Europe it came with a manual in many languages. Here’s the list of the headings for the recipes in English: Basic ice creams; Premium ice creams; Holiday recipes; Sorbets & Sherbets; Frozen yoghurt; Kids’ Favorites; and Frozen drinks. Each category offers 2 or 3 master recipes plus countless variations that take up 8 pages of the booklet. In the French section it barely uses one page to explain Vanilla ice cream; Apricot or Mixed Fruit Sorbet; and especially for kids, Liquorice ice cream. Hmmm, this time I think we’ll stick with the recipes in English.

Different from what we remember from the last few years that we lived in the United States when it came to discussing politics, people here want to know why you think a certain way, what your opinion is, and examples of why you do or do not like a political candidate, for example. We’ve seen high school teachers preparing their students for debates that they must face before finishing their studies. Although we now know these were not French philosopher Voltaire’s exact words, the thought expressed in a biographer’s paraphrasing is still valued in this country today: I disapprove of what you say, but I will defend to the death your right to say it.

In the right hand column of our blog under Favorite Links you’ll see Géraldine Lepère who has lots of videos about learning the language and the culture of France. She tells a story of sitting in a theater in Tokyo waiting for the show to begin when two strangers, a Canadian and an American, sit down behind her. Within a minute or two they knew each other’s names, where they were from, where they had visited in Japan, etc. In contrast, by chance a French couple sat beside Géraldine in seats that were clearly not theirs which they jokingly acknowledged amongst the three of them but no further conversation ensued until the show concluded and they said goodbye. Our personal experience would validate half of this situation. Bill’s “English Detection Radar” is constantly on and consequently we almost always end up talking with fellow travelers from the US, Canada, or other countries where English is the native language. 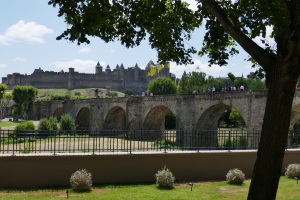 However, unlike Géraldine’s seat companions in that Tokyo theater, for us, those same conversation channels have been open with French people too. Naturally things might not flow as easily when you are mixing the two languages with some facial expressions and hand gestures thrown in, but the level of conviviality is still there. While there may indeed be cultural differences between the two countries, those have never gotten in the way of our feeling right at home in France.

Posted on September 23, 2018, in Life in France and tagged Americans in Carcassonne, Community, Food, Life in France. Bookmark the permalink. Comments Off on It’s always fun to compare.