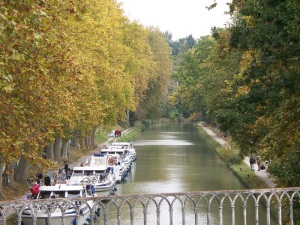 Walking along the Canal du Midi in Carcassonne

You may have read my blog post from last month that Bill bought me a Fitbit® which keeps track of your physical activity including the number of steps you take. Since I currently cover somewhere over 7 miles a day on a treadmill, and we won’t have a gym in France, he wanted to make sure I’d be able to keep track. Thoughtful, huh? Actually it really was and I like it so much he got one for himself and has become more of a fanatic about achieving his daily step quota than I.

While we were in Carcassonne in the middle of October we did a lot of walking around town. We tried to simulate as much as possible what our typical daily lives might be once we’ve moved such as walking over to the main square where the market is or rambling along the river or the canal. The good news there is that a single round trip between our house and the train station, for example, provides a good chunk of the distance we need to cover. Apparently it’s working since despite consuming significant amounts of wine, cheese, and bread my clothes still fit. 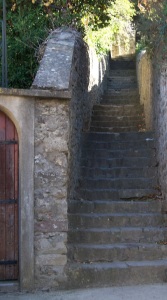 Steps up to the chateau in Carcassonne

Although the terrain around the city is relatively flat, walking up to the castle definitely is not. You certainly get a workout climbing up there and the Fitbit® gives you credit for flights of stairs but curiously it’s not really that many steps. I think that we can predict more trips into town and walks along the water than the staircase up to the castle.