← What’s for dinner?
The postman’s wife → 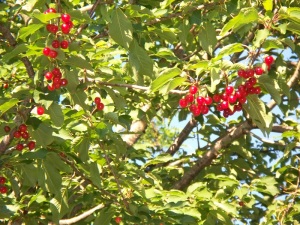 Cherries in the wild

This post’s title is what I used, just for fun, to search websites for the French equivalent of America’s Johnny Appleseed. It’s my rough translation, but essentially it’s meant to be John(y) Seed of Cherry since at this time of year they seem to be everywhere. The search led me to numerous newspaper articles about seed-spitting contests, a singer named Jean who wrote and performed “Love is a cherry” and a wood carver named Jean who makes tiny sculptures from the seeds. As interesting as all that was it still didn’t explain why so many vendors at the market have this luscious fruit available.

The Aude river runs between the upper and lower parts of Carcassonne and we cross it at least twice daily. Only recently did we realize how many cherry trees line its banks. Then we started spotting them in backyards, fields, and what we think used to be an orchard since lots of other fruit trees share a big open area just up from the water’s edge.

Last fall when we were visiting New England in the US, we were amazed at all of the apple trees that were growing in the wild which led us to the current search for a Johnny Cherryseed in France. The best I could come up with was a website from the Ministry of Agriculture that said in 1915 a French soldier, Léonard Burlat, took grafts from cherry trees growing in the wild back to his home where he started cultivating them. That must have been a success since half of all commercially grown cherries here bear his last name.

Across the river too

So now we know where all of those bins and bins of beautiful farm-grown red fruit that fill the market stalls come from, but what about those trees we pass by every day? That same website had the answer for that as well but sadly, not as romantic as I had hoped. Cherries originated in Asia and birds migrate from there to Europe every year. Yep, they ate the fruit and since the seeds didn’t get digested, dropped them along their flight path. Cherry pie anyone?

Posted on July 4, 2016, in Life in France and tagged Americans in Carcassonne, Food, Life in France. Bookmark the permalink. 1 Comment.

← What’s for dinner?
The postman’s wife →
Renestance
A new life in Lille