← Welcome to the season
The magic of Christmas →

Do you know the way to San…James?

The blue and yellow symbol point the way

It’s 1000 kilometers (600 miles) from Carcassonne to Santiago de Compostela in northwest Spain. Bill and I walk a lot but that distance is way more than we would want to cover on foot yet lots of people come here to do exactly that. Known by a range of names including the Way (or the Path or the Trail) of St. James, the Route (or the Road) to Santiago or the one we hear the most often, Camino de Santiago or just The Camino, it’s a pilgrimage pathway to the Cathedral of Santiago de Compostela. Believers go to the shrine there seeking the final resting place of the apostle St. James.

From what I’ve read, it was in the early 800s that the tomb of St. James was discovered on the north Spanish coast where the beaches offer an abundance of scallop shells. Over time these shells have become a symbol of anyone traveling on the pilgrimage and signposts along the route are often marked with the same design. In two of the attached photos you can see these symbols along the route through Carcassonne that partly follows the Aude river westward towards Toulouse eventually reaching St. Jean Pied-du-Port, a town in the Pyrenees mountains where the well-worn path across the top of Spain to the Atlantic ocean begins.

Chapel of Notre Dame with the shell symbol by the river

Bloggers and former Carcassonne residents Tracy and Alan, who encouraged us to start this blog, detail their experiences on The Camino in their blog, An Italian Point of View, and there is a link in the right column on this page. In the spirit of “the Camino starts when you step out your front door”, they took a routing from here to one of the dozen branches of the network that crosses much of Europe, all ending at the shrine in Santiago de Compostela.

Although Carcassonne is not on one of those main branches, mostly former Roman roads, there is a connection with an apparent mention of the shrine in the writings that remain from when the Inquisition was held here in the early 1200s. Those seeking penance were directed to undertake pilgrimages to Rome, Canterbury, Cologne, and Santiago de Compostela. That resulted in a construction boom of church-related buildings (monasteries, abbeys, hospitals) and other businesses to serve the pilgrims. Carcassonne’s 12th century Notre Dame de l’Abbaye, steps from the castle, offers meals and lodging to pilgrimage walkers and casual visitors alike. 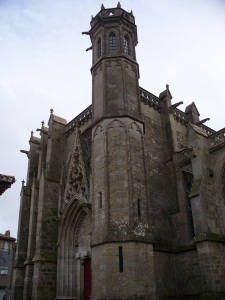 A detour to Basilica St. Nazaire before starting the Camino

We couldn’t find one of those scallop shell symbols on the Basilica of St. Nazaire that you see in the third photo, but many of the walkers we have talked to said that people often use this as their starting point before crossing the Pont Vieux (the Old Bridge from the 1200s) and on to the rest of the 1000 kilometers. By the way, the French name for this pilgrimage is Le Pèlerinage de Saint-Jacques-de-Compostelle which might be why we usually hear visitors just calling it “The Camino”.

Posted on December 14, 2016, in Life in France, Travel in France & beyond and tagged Americans in Carcassonne, Carcassonne. Bookmark the permalink. 4 Comments.