← A matter of taste
I’m dreaming of a chocolate Christmas →

One of my earliest trips to New York City nearly 40 years ago was at the end of November that happened to coincide with a huge Thanksgiving parade orchestrated by an even bigger department store chain. While those helium filled cartoon character balloons are impressive, I was more in awe of the thousands of store employees, who walked the two and a half mile parade route in below freezing temperatures, yet managed to keep the balloons under control. Another highlight of that trip was viewing the department store windows that had been dressed up especially for Christmas. Although we now live 4000 miles (6400 km) from New York, walking past the festive window displays in Carcassonne was just as much fun.

Chocolate shop on the square

As in many cities and towns across France, lots of retail shops in Carcassonne follow a traditional schedule of being closed for lunch, and not open at all on Sundays. All of that was cast aside last weekend when the entire downtown surged with excitement: hoards of shoppers, a roving Christmas band, all lights on, all doors open, markets and festivals filling the streets. The city provided a Christmas tree with basic ornaments already attached to any merchant who wanted one. Those same shop owners were encouraged to decorate their windows with the chance of winning a prize. It seems to me that we were the winners as we wandered around town enjoying the music, the decorations, and the festive atmosphere we found throughout this city dressed up in its finest! 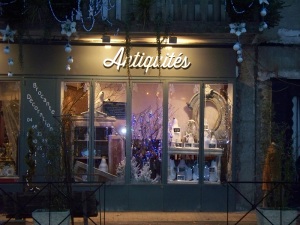 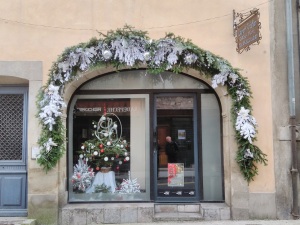 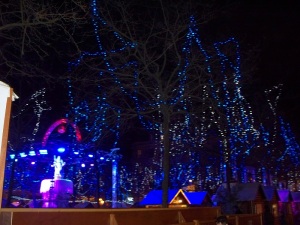 Lights in the trees

Bill at the foie gras festival

Bread and braided garlic at a street market

Posted on December 23, 2016, in Life in France and tagged Americans in Carcassonne, Carcassonne, Community, Markets. Bookmark the permalink. 1 Comment.