← Wine high school, our sophomore year
So many choices →

The Canal Royal in Sète

The Canal-du-Midi that runs through Carcassonne was built 350 years ago to help connect the Atlantic ocean with the Mediterranean sea. One long river, a second canal, a bay, and an estuary all combine together to link Bordeaux on the west coast with the port city of Sète on the east. You can rent a house boat and glide along at no more than a leisurely 8 kilometers (5 miles) per hour to arrive at the Mediterranean a couple of days later, or spend just one euro and get there in about an hour on the train.

One of the reasons we moved to this part of France was to have easy access to the rail system that could get us all over this country and the rest of Europe. When you travel outside of rush hours, the regional trains in our area offer some tickets daily at only one euro a piece. While traveling by fast train to and from Paris, we had been taken by the beauty of the port city of Sète and now with the opportunity to get there for less than the cost of an espresso, we had to do it.

Gondolas on the canal

Walking out of the train station, we headed straight for the feature that gives Sète its nickname of “Venice”, the canals, and specifically the Canal Royal so named because of the decree to create the port in 1660 by Louis XIV, the Sun King. We passed several blocks of townhouses, apartment buildings and small businesses before stopping to admire the beautiful entrance of the Grand Hotel. This marks the beginning of the tourist section where shops, bars, restaurants, and canalside cafés fill the streets. It’s also where jousting tournaments, in the water, have been taking place since the summer of 1666.

Further along the waterfront the restaurants gave way to the working port. We passed by the harbor tour boats, saw the cruise ship dock, the daily fish auction, and countless fishing boats of various types and sizes. We continued on to the lighthouse, built in 1947 on a jetty that was begun in 1666. Since we were now in the oldest part of Sète where the townspeople originally earned their living, and many still do, it made sense to investigate the streets in that neighborhood called the Quartier Haut (High Neighborhood) settled by southern Italians around 1850 and also known as Little Naples.

From there it was a short distance back to the center of town to see Les Halles or the covered market where, as you might expect, seafood takes center stage. I counted over 50 vendors, many of whom, such as the numerous fish and shellfish sellers naturally featured the “catch of the day” while even clothing, jewelry, and art shops acknowledged their debt to the sea. Our toughest decision of the day was where to eat lunch since there were so many choices. We opted for Bistro St. Louis since they were located directly beside the Canal Royal with a nice view of the water and all of its activity. We feasted on fresh seafood of various kinds but chose to skip the city’s signature dish, La Teille Sétoise, that you and I might think of as an octopus pie. 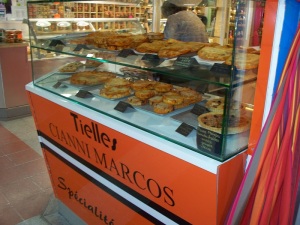 The specialty of Sète

To walk off lunch it was time to climb into the mountains, or actually “mountain” since there’s only one, to get a panoramic view of the Mediterranean Sea, of the city itself, and of the bay where canal boaters from Carcassonne end up. I’m glad that the return journey to the train station was all downhill from there because it gave us an extra boost of speed to get us back in time to have a cool drink at the station café, basking in the sun, while waiting for our departure. The day we spent in this pretty port town went all too quickly.

Sète through a forest of masts

Entrance to the Grand Hotel

Fresh fish just off the boat

Posted on April 2, 2017, in Life in France, Travel in France & beyond and tagged Americans in Carcassonne, Food, France, Public transportation. Bookmark the permalink. 8 Comments.