A street in Pézenas

Our friends Sally and Larry are sneaky. They know how much we enjoying seeing parts of France that we haven’t been to, especially when we can go there by our favorite mode of transportation, the train. They also know that despite there being over 3000 stations in a country smaller in area than Texas, we still need a car to visit some villages, towns, and especially picturesque places. To the rescue they’ve come, inviting us along for day trips out of Carcassonne when they’ve rented a car to take visiting friends or family around. Usually they let us know well in advance but sometimes they “kidnap” us for the day and just tell us to be ready to leave at a certain hour. It was one of those surprise adventures that got us to a “City of Art and History”, Pézenas.

As instructed, we showed up at their house at 8:30 Wednesday morning and about an hour later we were parking near “old town” Pézenas, where the entire town center has been designated as a national protected historic monument. With narrow, cobbled streets and leaning medieval buildings it was easy to understand why we left the car in the lot. On foot we could admire the large mansions with their courtyards and the tiny alleyways populated by small restaurants and artisan workshops such as iron and wood workers.

We walked through the arched city gate into what was originally the Jewish quarter and continued into the surrounding streets past shops and galleries on the ground floors of houses from the 16th to 18th centuries.

The celebrated French playwright Moliere spent several summers in town in the 1650s and his presence is well preserved in many places around town including the 17th century Peyrat mansion with its 3-D Scénovision show, a resource center, drama and costume design school, museum, arts and crafts center, and a theater featuring his plays. All of this attention seems fitting for someone I saw listed as the equivalent of Shakespeare to the French-speaking world. After all, Bill and I are still struggling to learn to read, write, and speak what everyone here knows as the “langue de Molière”.

The vaulted ceilings of the 16th century Lacoste mansion

With the morning devoted to sightseeing in town, it was time to drive about 20 minutes back towards home for lunch at Château St. Pierre de Serjac, an estate with vineyard, hotel, spa, and restaurant set on a 200-acre (80-hectare) property. It was sunny enough to sit out on the terrace to enjoy a 25 euro (29 dollar) 3-course set menu of soup or salad to start, a main course of sea bass or lamb, and a dessert of  fruit flambé in chocolate or panna cotta. To make the extensive wine list a reasonable size we looked only at reds from just the surrounding area and still there were 18 different bottles averaging in cost about the same price as the meal.

Soon after we started the drive back to Carcassonne I noticed a “Castle for Sale” sign by the road and just now looked up the advertisement online. It’s a 16th century building, totally renovated with 12 bedrooms, 2 kitchens, a dungeon, a separate 9th century Romanesque chapel with 175 hectares (432 acres) of land. A week’s vacation rental is 16,000 euros (18,800 dollars) but the sales price is “on request”. I don’t think that we’ll ask.

Former consular palace with fountain from 1552 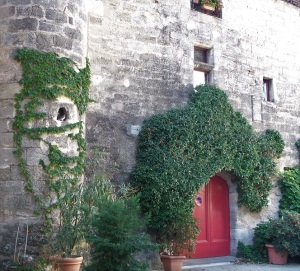 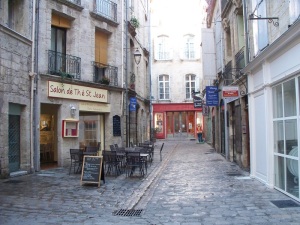 Side street of cafés and shops

Posted on February 18, 2018, in Life in France, Travel in France & beyond and tagged Americans in Carcassonne, Day trip, Food, Wine. Bookmark the permalink. 4 Comments.

← How much is that house in the window?
It’s Linky, it’s Linky ♫♬♫ →
Renestance
A new life in Lille