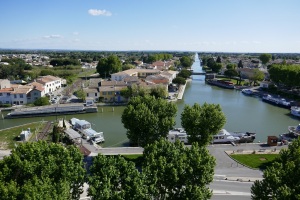 If you make a direct translation of the town name we recently visited, Aigues-Mortes, one of the options that you can come up with is the title of today’s blog post. Luckily for us it was anything but dead; for the 3 days we were in town there was plenty to do. In fact, we could have been entertained right from our accommodations, a canal boat named the African Queen because it was exactly this style of a 1927 steamboat that was used in the movie that won Humphrey Bogart his only Oscar. While relaxing on board or fishing from the deck did have its appeal, there was much to see in this once-Roman town with ties to our own Carcassonne. 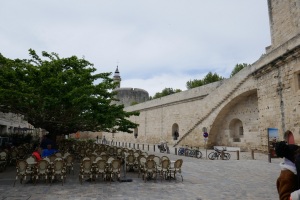 French king Louis IX, later known as St. Louis, had a busy year in 1240. A short walk from where we now live in Carcassonne he was fending off attacks of forces trying to reconquer what remains Europe’s largest fortified Medieval city plus establishing on our side of the river the new part of town that we call “home”. In that same year, 186 km (115 miles) away he also established Aigues-Mortes to give his navy easy access to the Mediterranean and the Crusades he wanted to lead. Louis IX died on one of those excursions in 1270 but his grandson completed the stone walls 30 years later that still surround the town today and through which we walked via the main gate, La Porte de la Gardette, which was the only way in or out from the 16th to the 18th century. 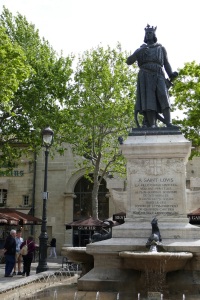 Place St. Louis with the chapel of the Capucins

Once inside the walls we followed Grand Rue Jean Jaurès, lined with shops and galleries, to what is the heart of any town from the Middle Ages, the main square. Place St. Louis is surrounded by restaurants and cafés that spill over into the open central area shaded by huge plane trees. On one corner of the square is the church Notre Dame des Sablons that was built sometime prior to 1260 before there were any defensive walls. At one point the building was used as a warehouse for the salt gathered from the sea, noting the value of this commodity at the time. On another corner is the 17th century convent, La Chapelle des Capucins, that’s now an exhibition hall and art gallery.

Two other chapels of note are the Pénitents blancs and the Pénitents gris so named for the color of the habits worn by the monks, white and gray. The latter, originally built of wood in 1360 but destroyed by fire in 1575 was eventually rebuilt only to be used for grain storage during the French Revolution. Interestingly, it was all of that dry animal feed that hid and thus preserved a statue of the Passion of Christ sculpted in 1688 by Jean Sabatier, well-known in the south of France. Unfortunately for us his artwork is currently out for restoration so we only saw photographs.

Sea salt and vineyards from the top of the city walls

We went back towards the main gate to gain access to the walk along the top of the walls that encircle Aigues-Mortes for 1,640 meters (1 mile), fee of 8 euros. From up here you can survey not only the entire town but also the surrounding countryside including the salt marsh on the sea side and the vineyards on the other, both of which brought great wealth to the area. From the walls we had access to the Tower of Constance that initially provided shelter to Protestants but later became their prison in 1685 when King Louis XIV returned to Catholicism as the official religion. 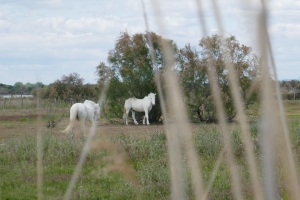 A pleasant surprise was a nature museum with the lengthy name of La Maison du Grand Site de France de la Camargue Gardoise that is “dedicated to discovering the landscapes, traditions, flora and fauna of Camargue Gardoise.” In other words, it was the one place that we could go (and maybe see) the natural highlights of the area including the salt, the pink flamingos, and the wild horses. Entrance is free and we walked there in 15 minutes from the main gate of the walled city.

So why the name that can translate to “Acutely dead”? For the Romans the town would have been called Aquae Mortuae (Water Dead) referring to the motionless, salty marshes and ponds that In the local language of Occitan became Aigas Mortus and then into French, Aigues-Mortes. 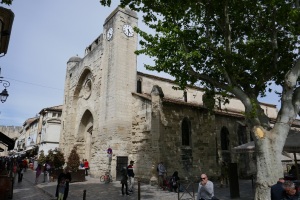 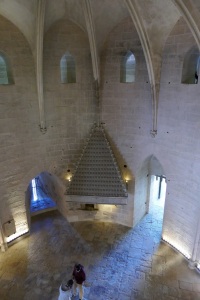 Inside the Tower of Constance

Posted on May 12, 2019, in Life in France, Travel in France & beyond and tagged Americans in Carcassonne, France. Bookmark the permalink. 1 Comment.