Our balcony view in Collioure

Earlier this year during the 2-month lockdown, or perhaps even more descriptive in French, la confinement, our desire to travel never lost its appeal. After all, our vacation plans for both April and May fell victim to the virus but that simply gave us more resolve to try again as soon as it was reasonable to board the train for another adventure. Those two trips had each been several hours away, and we’ll reschedule them later, but one destination less than 100 km (60 miles) from Carcassonne, as the crow flies, really caught our attention for this first venture out closer to home. It didn’t take much convincing once Bill showed me the view from the apartment that you see above accompanied by those magic words: by the sea. Off we went to Collioure.

Anchovie boats by the Château Royal

About a year before we moved to France, we had narrowed our home search to the south and we asked our friends who live near the border with Luxembourg if they knew anyone who resided down here. Their friend Olivier is from Perpignan, about 120 km (75 miles) from Carcassonne, and along with the names of several villages/towns/cities we might want to check out he also sent us a photo of one of his favorite spots: the beach at Collioure. Although that’s not where we ended up settling, it was indeed the first stop of a scouting trip via a rental car after we got off the plane from Atlanta to Barcelona. That was just a short stay to get a feel for the area while this post-lockdown visit was intended to give us the time to enjoy the town.

Although the first written record of Collioure appeared in 673 with the mention of a castle, it is like many ports along the Mediterranian that were well-known to the Romans and the Greeks perhaps 2000 years before that. Since our apartment had a direct view across the bay to the Château Royal, that was a logical starting point for our first day there. In 1276 the foundations from a Roman fort were chosen as the building site for the summer residence of the kings of Majorca. Over several centuries it provided protection for the fishing village and its port plus welcomed royalty, townspeople, and eventually prisoners. 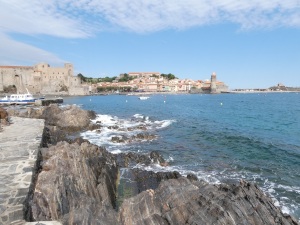 Across the bay to Notre Dame church

Back around the crescent of Boromar beach, on the opposite point from the Château Royal is the church Notre Dame des Anges that got its start in 1684. The belltower has been used as a defensive lookout point and a lighthouse and today remains an easily recognized symbol of the city. Inside we were impressed by the 3-story tall wooden carved and gold leafed altarpiece that fills the rear choir.

Right behind the church is the Mouré District (Quartier du Moré) where one blogger said you should go if you were looking for “charm and romance”. I understood that statement once we started wandering the paving stoned streets and saw the narrow, vine and flower covered former houses of winemakers and fishermen. Art studios and galleries display prints and other works inspired by Henri Matisse who arrived in Collioure in 1905 and developed Fauvism (in French, fauve means “wildcat”) that used strong colors with emotions to match. A self-guided walking tour takes you past many spots in town where Matisse and other artists created their original works.

View from the windmill

About a 20-minute walk from where we were staying on the seafront is a windmill that was authorized to begin operation in 1337. At the time it ground wheat but during its restoration in 2001 it began to crush olives still using some of the original solid wooden machinery. From there we continued walking up the hill for another 20 minutes to Fort Saint Elme that was built in the 16th century with walls 8 meters (26 feet) thick which explains why it was impregnable and still stands today. From there we had great views over the Mediterranian and Collioure below. On the opposite side of the bay, three other forts (Miradou, Carré, and Rodon) provide equally good vantage points and confirmation of the tactical importance of this picturesque village.

Historically, anchovies have been the big catch in Collioure and while we saw those on most menus there were plenty of other fresh fish choices. Even if we hadn’t had the opportunity to feast upon anchovies in brasseries and cafés, canned versions to take home were plentiful in shops throughout the town. 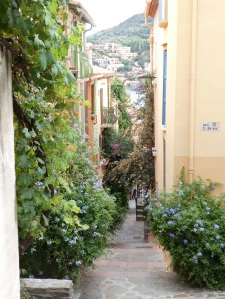 This was the perfect trip to take as a reintroduction to travel: close to home with only an hour and a half on the train. On all forms of public transit you have to wear a mask at all times but with such a short journey, there wasn’t time to enjoy one of our favorite onboard activities—a picnic—but it didn’t matter. After all, that view “by the sea” awaited us.

Fort Elme above the city 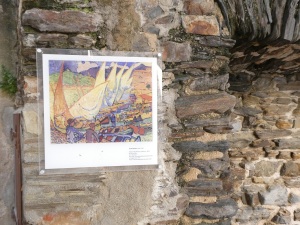 Posted on September 27, 2020, in Life in France, Travel in France & beyond and tagged Americans in Carcassonne, Public transportation. Bookmark the permalink. 7 Comments.