← Where not to go
Montpellier day trip →

View from the Magdala Tower

If you’re a fan of the novel by Dan Brown called The Da Vinci Code you’ll know that a large portion of the book takes place in France, mostly in or near Paris. We’ve both read the book and seen the movie twice and even walked friends and family around the nation’s capital to places integral to the story such as the Louvre and St. Sulpice church. Then we moved to Carcassonne only 28 miles (45 kilometers) north of a village that I’ve long associated with this thriller that was inspired by the bestseller The Holy Blood and the Holy Grail. According to this book, it was here that the local priest found a fortune in gold coins, much of which, the legend continues, remains buried in or near his tiny hilltop church plus proof of the marriage of Jesus to Mary Magdalene who bore their child. Author Dan Brown skillfully wove these bloodline details into his novel and suddenly the village of Rennes-le-Château sprang to life. We decided to join the 100,000 other yearly visitors who travel to the foothills of the Pyrenees to see what we could find.

Before visiting a new destination we always do a virtual walk-around with Google maps to get a feel for the terrain and to have a preview of the sites we’ll be exploring. That was a challenge this time since the most well-known attractions in the town are located within the estate that Father Berenger Saunière renovated which is beyond the range of Google’s roving cameras. This is the priest who apparently spent the equivalent of 2.5 million euros (3.1 million dollars) restoring a church with its presbytery (now a museum and ticket office) and building a villa plus a mini-castle with tower all on the salary of a country priest in 1900. The tourism’s website describes that as the real mystery of Rennes-le-Château. 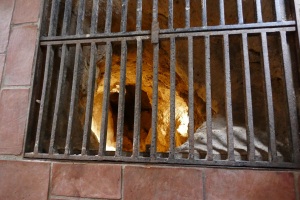 Bottomless excavations searching for the fortune

Our driver, Didier, dropped us in the small upper parking lot and down the walkway from there is the church of St. Mary Magdalene that had its start in the 11th century but little remains of the original structure from that period other than the foundation. It’s inside here that legend says the priest found mysterious documents hidden in an altar pillar and gold coins secreted below Carolingian Knights’ Stone on display in the museum. It was a short walk from there through the Orangerie to the Magdala Tower that Saunière used as his office and library. With the commanding views out across the valley below to gaze upon, I’m not sure how much work or reading he would have been able to do. A stroll through the nearby gardens and then into the Villa Bethany, a mansion that Sauniène said would be used for retiring clergy, completed our Balade Mystérieuse.

A quick descent down the mountain’s windy road quickly put us in Alet-les-Bains, a village with some of its 12th century walls and gates still standing. The Romans enjoyed the thermal springs here 2000 years ago and we saw local residents filling their water jugs from one of the fresh mineral water sources that continues to flow today. Substantial ruins of the abbey with origins from the 8th century stand close to the house said to have been occupied by the grandparents of Nostradamus who apparently visited there often.

There was no mystery as to where we were going to stop next given that we live in the middle of what Bill and I call Wine Country. It was time for some tastings and we were only a short drive from Limoux where sparkling wine got its start in 1531. We’d been here before (blog post Fill-er-up) so we took the opportunity to enjoy some favorites and to try some different bottles than on the previous visits.

We couldn’t fill up the back of the van with too many cases from Limoux since we had one more stop and we needed space for a 15-liter (4 gallon) “water” jug that conveniently also holds wine. At the wine cooperative, Vignobles de Carsac in Cavanac, the young woman who was dispensing the rosé into our container from a pump that would feel right at home in a gas station suggested chilling the wine well and then enjoying it around the swimming pool. Well, no pool for us but warm summer evenings and cool wine are still a perfect match.

Practical notes: It’s a long and windy drive up to Rennes-le-Château, elevation 500 meters (and I thought the fortress in Carcassonne at 250 meters elevation was high) and most of the parking requires a steep climb up to the village. We were lucky to be dropped off inside the village where cars are prohibited mid-June to mid-September. Entrance to the church is free and right next door is the ticket office (5 euros per person) inside the presbytery that also houses the museum. Arrows then point you to the Orangerie, the Tower, down to the garden (be sure to look for the excavations under the walkway), into a small portion of the Villa, and then return through the presbytery to exit. We were there for one hour but you could spend much longer if you read all of the display notes in the museum.

Cathar Excursions, who took us on this trip: https://www.catharexcursions.com/

Exterior details at the Nostradamus house

Posted on June 24, 2018, in Life in France, Travel in France & beyond and tagged Americans in Carcassonne, Day trip, Wine. Bookmark the permalink. 3 Comments.